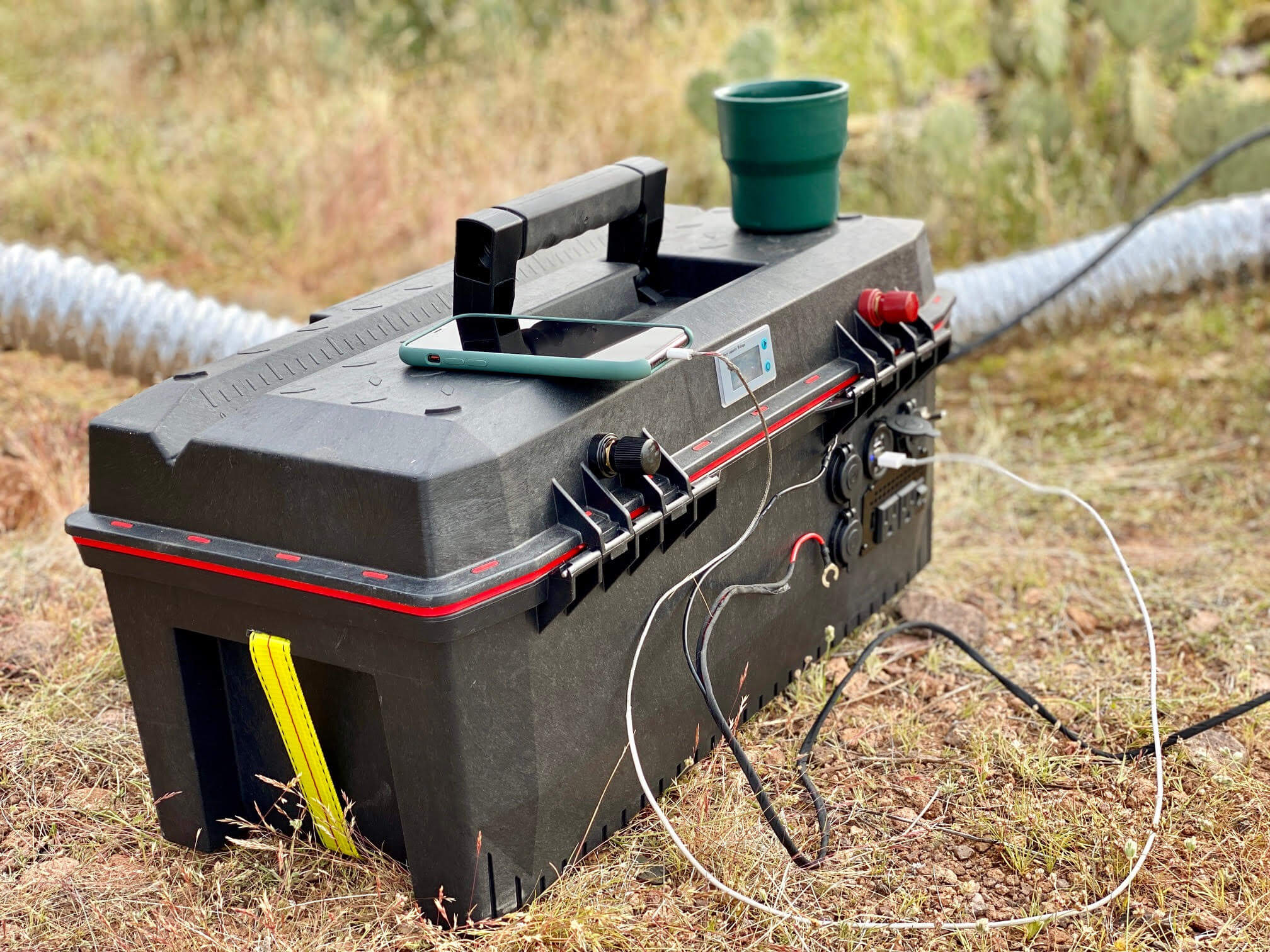 When we started looking for some portable power, there seemed to be plenty of products on the market, but they were all quite costly… The Yeti Goal Zero 1400 power station is $1900! Our thought was that there can’t be much to it (though the Goal Zero does pack in some fancy features like mobile app connectivity and monitoring etc.) In the grand scheme of things, the design very simple, just a battery with a way to connect to it. The important thing is knowing the right type of battery for this application. So, what we have done is put together a complete guide for a DIY power station battery pack system that has the similar power performance as the expensive units, but at a fraction of the cost.

First things first, we started off with the proper sized toolbox. We felt this Craftsman one was big enough, and also structurally sound enough to handle the weight. (Full disclosure, the cheaper battery is HEAVY)

The layout is pretty simple… and the battery will be on one side, so all of the plugs naturally end up on the other.

Measure out your plug locations as you wish; we decided to go with this arrangement as it made sense for the plugs and inverter we used.

Next, we picked an inverter that has a conveniently removable face plate, so we were able to unscrew it, and get about 2 extra inches of internal wiring to reach the wall, while having the body of the unit mounted to the floor. In this case, the inverter mounting is nothing fancy, we just took some 2×4’s laying around and bolted the inverter to it, and then screwed the 2×4 to the toolbox through the bottom.

When you look inside, you’ll see that wiring isn’t anything fancy, just bundle it with some zip ties when you are done. As simple as it sounds, to secure the battery we just Dremelled a slot in the bottom and side of the tool box to run the strap though. It works really well, just be mindful of sliding the toolbox around too much as it may wear through the strap eventually.

Note that the toggle switch is now installed as well. We used one that is rated for 20A at 120V, which is more than enough to just run the 4x 2 Amp USB plugs though. The Cigarette lighter plugs don’t have LED’s so those don’t need to go through a switch.

The state of charge meter works pretty well, it has some menu options that let you program it to the type of battery that you have so that the readings are a bit more accurate. It also comes with a thermocouple to display temperature, so make sure to tape it to the battery somewhere, we recommend using aluminum tape.

To charge the battery, just use the AGM battery charger linked in the shopping list (make sure it is set on 12V AGM mode). Because the charging does take a while, so start at least a day before you intend to use it. For charging, we just use the red and black terminal posts, just don’t mix them up!

Below is the State of Charge voltage chart we used to program ours (This is an AGM battery):

We have taken the battery pack with us on several camping trips already and it works great. You can use it for charging phones, laptops, drones, running a heater or heated blanket etc. And this battery pack is all for a reasonable price (just be ready for it to be a bit heavier than the commercial units).

We’ll definitely be adding this to our list of camping essentials!