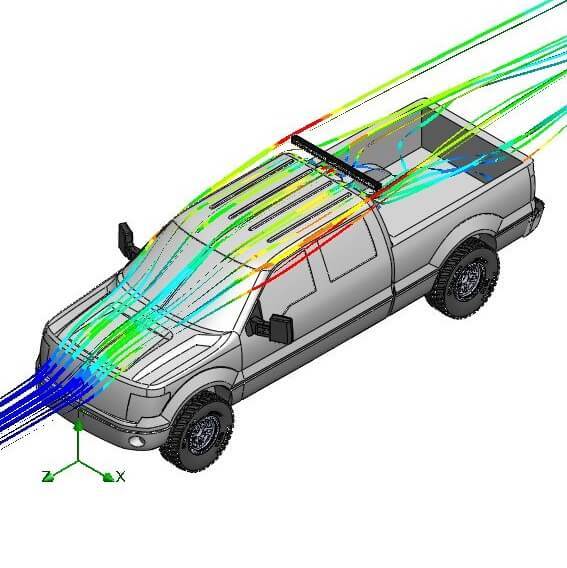 Previously we wrote about LED light bar aerodynamics and specifically studied the effects of an LED bar mounted on the windshield of a truck (a 2014 Ford F150 in this case). We recently received a comment on the article asking about LED bars on a Sport Bar style rack behind the cabin of the truck, so we thought it would make for an interesting comparison.

In summary, the LED bar behind the cab on a sport bar mount didn’t effect the drag force as much as I expected. This analysis showed that the fuel efficiency would go down by just 2% (from 18.5mpg, to 18.1 mpg) as a result of this mounting approach, while the windshield mounted LED reduced efficiency by 7% and brought the fuel consumption down to 17.4mpg. Although the fuel efficiency is better with the rear mounting of the LED, you may find that the light pattern may be a bit of a draw back; with the LED that far back, the roof will block all the low light angles, and as a result the setup will illuminate mainly out in the distance rather than right in front of the truck. This is a great mounting location for “laser” light led’s which have a very narrow beam pattern, and would be great to combine with some powerful fog lights in the bumper which would illuminate the trail directly in front of the truck.

If you are curious about specific details of how the analysis is set up, go check out the article linked above. Hope you enjoy the rest of the led light bar aerodynamics analysis below.

First things first, we need to adjust the mesh so it focuses in on the aft portion of the cabin.