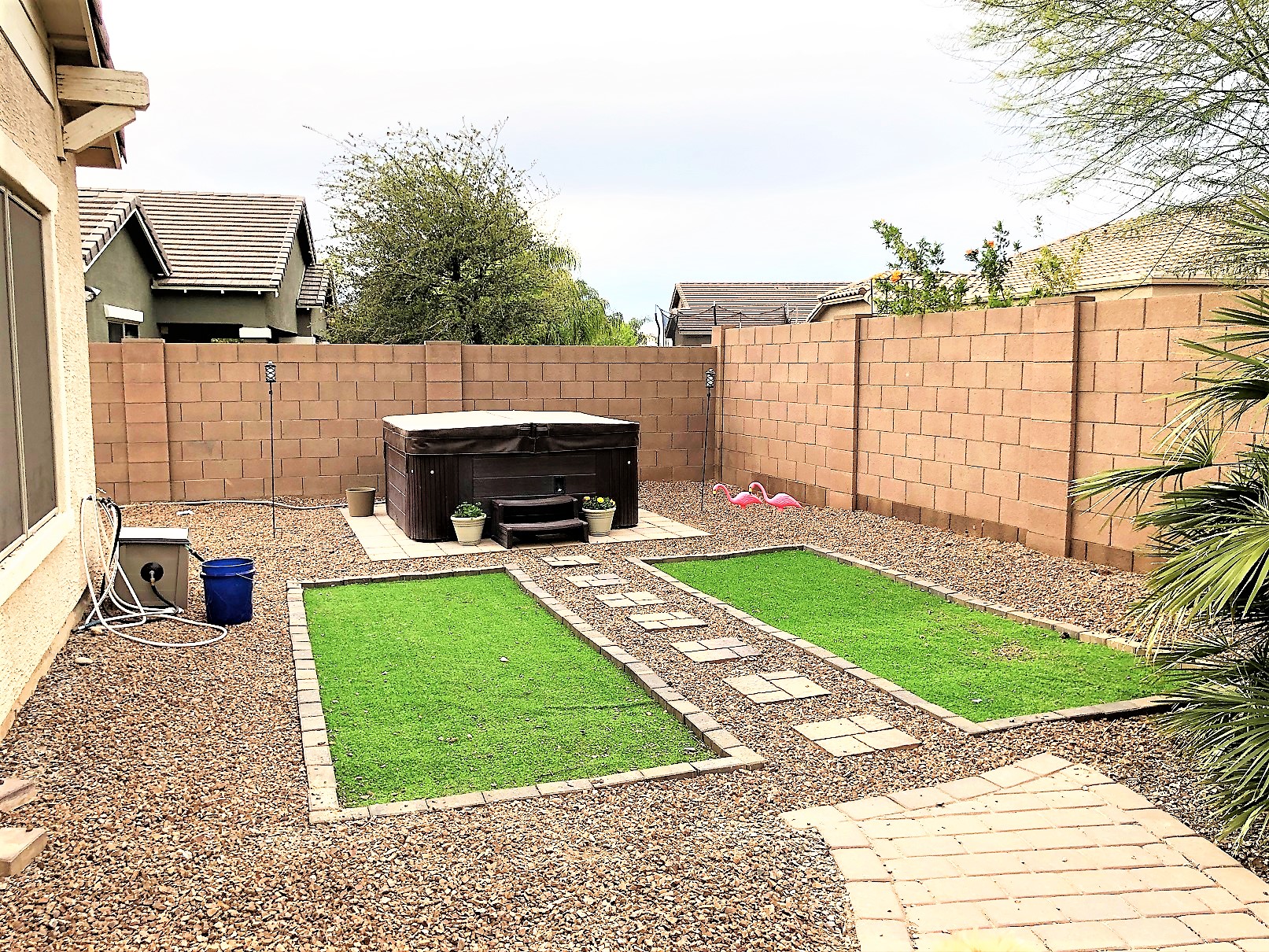 We had been talking about it for quite a while, and even though I do a lot of craigslist hunting, we had yet to pull the trigger on a DIY hot tub install. It was August in Arizona, so the temperatures didn’t really even drop below 100F even at night, so at that point, a hot tub was not even on our minds. Then one night, Savannah went out with her girlfriends, and said she got us a hot tub for $1000; one of her friends’ family had just bought a house with a hot tub that they didn’t care for, and just wanted it gone.

…And so it began. We weren’t ready for it, but had to jump on the deal. Spoiler alert, since this was going to be a project on a budget and we were doing it all ourselves, it took us 4 months to get the tub up and running, and then another 4 months to finish out the yard.

Pro Tip: Go on craigslist and find someone who moves hot tubs and don’t waste your time. I tried to come up with various ways to do it myself with a few buddies, and even with having a truck/trailer it was going to be tough to get the tub through a narrow side gate without damaging it. We found a guy that agreed to move the tub from 45 minutes away for $200, and it was worth it. He had the tub loaded up in 30 minutes and unloaded even faster.

With the hot tub relocated to the side of our house, we started planning our layout for the new back yard. We wanted to maintain the nice pavers on the right side of the yard, and redo the left side where the grass was dying anyway due to shading from the house. I generally use Solidworks for everything, however for this one I was curious to try out some CAD software that was geared a bit more towards architectural/landscape design. I ended up using SmartDraw, they have a 30 day free trial so I gave it a shot. It was fairly easy to use once you figured out how to work the dimensions.

With a general plan in place, we went to work. I first built up a 10ft x 10ft frame border out of 2×4’s for where the tub pad was going to be; I found that having that visual representation in person helped a lot. Then I started tearing out the grass and paver border with a shovel. In Arizona, just about every lawn uses a bermuda grass for the summer grass, because it can survive just about anything; to get rid of it, you want to dig at least 2 inches down to remove the roots. One night, I spent an hour or so digging out the grass, and got maybe a slid 3ft by 3ft section done… you probably see where this is going by now.

This was hard work, and not efficient use of the limited time we have these days with the two young boys running around. Instead, I dug out the old sprinkler system, and capped off the line. Shortly after, we loaded the kids in the truck and went to the closest Home Depot to rent a Bobcat; another $200 that was worth every penny. We rented it for just 4 hours, and were able to level out the entire half of the yard; had a ton of fun driving the thing around too, I can’t believe they just let anyone take those without any prior training or experience.

We positioned the frame and dumped two 900lb bags of sand from Lowe’s in the middle… this would give us just over 2 inches of sand base.

Based on the research that I’d done, we gave the pad a 1-2 degree slope for water runoff, which was done using a 4ft level, and a half inch piece of wood.

Leveling out the sand took some time, but the tool I had made out of a two by four ensured exactly 2 inches of sand height all the way around.

One note of advice… don’t spend too much time making things perfect before you are ready to lay down the pavers. Some roaming cats made sure to leave their foot prints, and then the kids could not keep their hands out of the perfectly smooth sand either.

The pavers went down super smoothly, and it was very satisfying setting them in place. We then used some Paver Set to secure the perimeter and keep the sand base from being washed away.

With the hot tub paver pad complete, it was time to put the tub on it. We no longer had the luxury of the tub moving equipment, so it was down to brute force. Our good friend Tyler came by after work, and the two of use simply dragged the 600lb of hot tub into position using some tow straps and a moving dolly to get it up and over the edge of the pavers.

We knew that the wiring would have to get done at some point, but I completely forgot how expensive 6AWG wire would be due to the prices of copper these days. After shopping around, I found that Home Depot had 500ft pools of black 6AWG wire for $265, which was BY FAR the cheapest I could find. Make sure to have an licensed electrician do your wiring, or have them inspect it to make sure everything is up to code. In our case, since we were running this through conduit, we had to use the individually insulated THHN wire (some cases allow for pre-made 4 wire cable depending on how it is being routed). Buying the wire, 50W GFCI spa outlet, and the conduit, we were roughly $400 in for the wiring portion of the install. The trick is to get colored electrical tape, and use that to mark the wires; this allows you to buy one color wire in bulk and save a ton of money.

To get the wiring to the hot tub per code, we had to run a portion of the conduit under ground from the house to the perimeter wall. Code requires a buried conduit to be a minimum of 18in below the surface. As before, I started digging this with just a regular shovel. The first 12 inches went easily, and then I hit the hard packed Arizona desert soil. This took me all evening into the dark hours, but I finally managed to get required depth all the way across… And suddenly, it started to rain; Arizona monsoon rain. This flooded the trench, and had me bailing it out with one of the kids’ sand buckets the next day… not fun.

Running the wires through the conduit was actually easier than expected. We pushed it through each conduit section first, like a bead necklace, and then bonded all the conduit together in its final resting spot. Once again, make sure to consult a licensed electrician for your wiring, but this is what ours looks like in the GFCI box, pretty straight forward. Check your state code, but in Arizona we are required to have the GFCI box at least 5 feet away from the hot tub, but within direct line of sight.

And with that complete, we were able to fill up the tub and power it on. This was a very exciting time for us, only one thing we didn’t account for: how long it takes for the water to actually warm up in these electric hot tubs. This was winter time, so it took roughly two full days to get up to temp before we could get in.

At this point, we were so exhausted and glad to have the tub up and running, that we didn’t even care about the rest of the yard. It stayed like this for 3 months or so just because we were enjoying the tub in in the cooler winter climate, and didn’t want to thinking about finishing the yard.

Once we were ready to get back to work, I scoured the ends of the internet, and scored some free gravel on Craigslist. All we had to do was show up to this guy’s house, and haul it way. The kids obviously wanted to help, and to our surprise, they were ACTUALLY helpful and were filling up buckets for me to haul to the trailer.

We didn’t want to load up the truck bed, in case we couldn’t unload it all that same day, so we used the UTV trailer instead. The trailer doesn’t have any side containment, so we simply bought one of the 3 cubic yard dumpster bags for $30 from Lowe’s and it worked perfectly.

The plan had always been to replace the grass with artificial turf. And that had been a big reason for the delay, we were simply saving up for the cost of the turf. However, we had gone to the Scottsdale Offroad Expo, and in conversation with the sales manager from Black Series Campers, he offered us several rolls of their expo turf for FREE if we came by after the expo ended! It isn’t exactly the turf you normally see, but it is still a step above the “carpet” stuff you see for cheap at Lowe’s, plus it is meant to handle lots of foot traffic at expos, so we figured we’d give it a shot for the time being while we keep saving for the real stuff.

Being the cheaper turf, we didn’t really worry about any install prep and just laid it down the best we could and put border pavers around the edges to hold it down. Then in went the gravel, and things were staring to take shape!

The 5000lb of free gravel was exactly what we needed to cover the new portion of the yard. Since this was used gravel, it had some dirt and whatnot on it that didn’t look too great, but after simply spraying it down with the hose for a few minutes, all of that washed off and the gravel regained its aesthetic appearance as if it was new.

All in all, the yard looks very close to our original drawing, and we love it! As far as the cost breakdown, this entire project cost us roughly $2100… not bad.