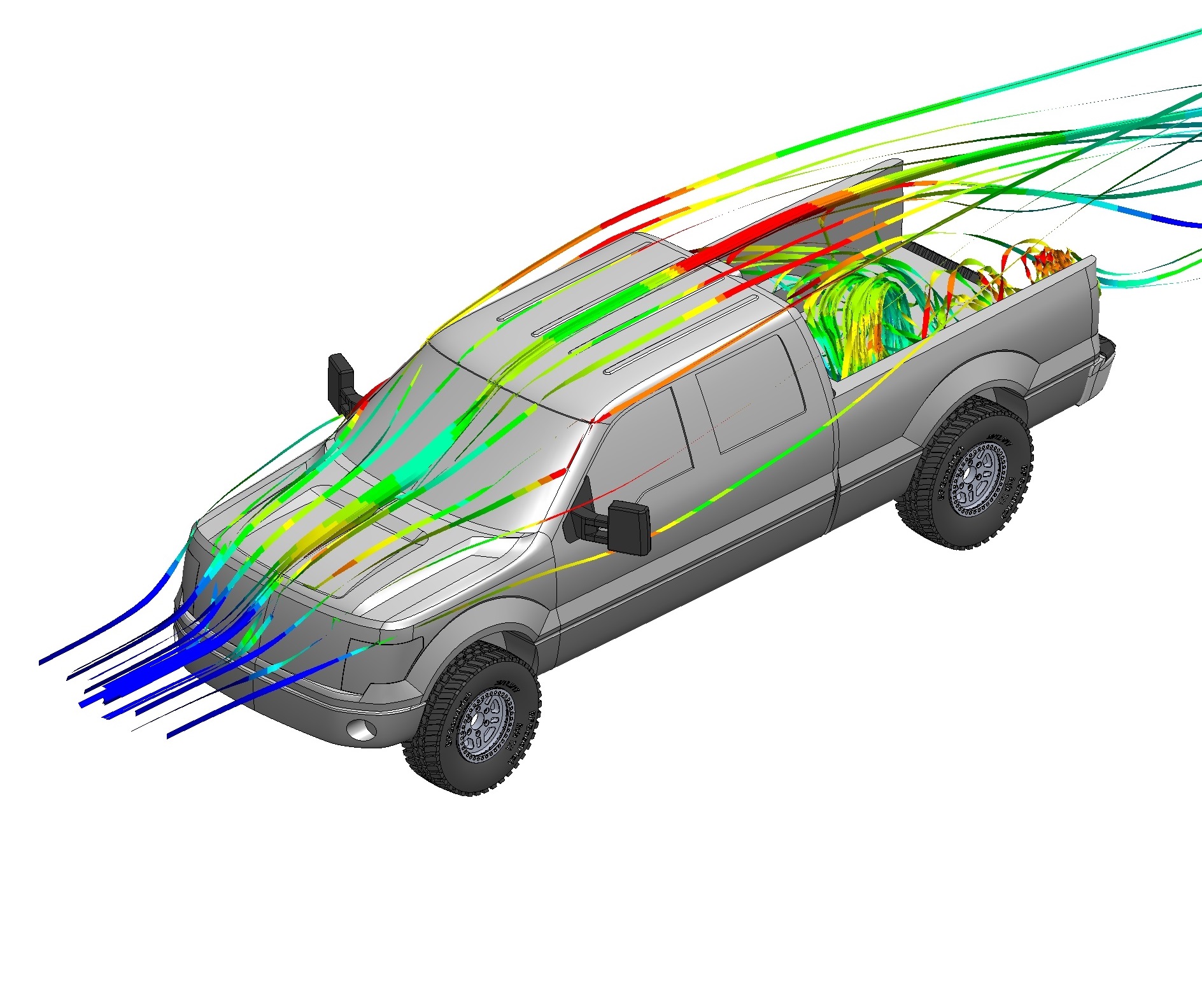 Our first tow rig was a 2000 F350 7.3 Powerstroke Dually, amazing truck, however the tailgate had been stolen before we bought it, so we started to look for affordable replacements. One of the first things that comes up, is the recurring theme of “flow through” steel grate style tailgates that claim to be more fuel efficient because they let air through instead of trapping it.

…But is it really?

No. in fact, the aero analysis shows that the drag force is 19% higher at highway speeds with the tailgate removed. This is directly proportional to your fuel economy, which means that if our F150 normally gets 18.5mpg, we would get 15.5mpg on the highway if our tailgate was down. Ouch.

What you can see in the image above is a velocity plot down the centerline of the vehicle with the tailgate removed. Now compare it to the image below which shows the same plot, with the tailgate on. without getting too technical, notice the difference of the shapes of the blue region, where the air velocity is virtually zero with respect to the truck.

Now, at initial glance, you may say that the plot with the tailgate up has the zero zero velocity air extending out further, and thus it has more of a low pressure zone behind the truck. But that is not what is actually happening.

Although it is far from perfect, the airflow over a pickup truck bed with a closed tailgate is actually rather smooth. This is because the inside the bed with the tailgate closed is almost “trapped” and is just circulating inside the bed behind the cab glass, and it doesn’t really escape or go anywhere (as shown in the image below). What this does is it allows the air to flow from the roof, over this circulating air and past the top of the tailgate.

Now compared the the flow with the tailgate down, the air goes from the roofline down to roughly 1/2 of the bed length, and then gets sucked into the low pressure zone behind the cab. What this does is basically applies a low pressure drag force over then entire aft cab surface. While the closed tailgate configuration works out to have the primary low pressure zone just behind the tailgate. (There are other aspects at play here also like the air separation point)

Another way to think of it, is the circulating air within the bed of the closed tailgate configuration, draws an imaginary line from the roof to the top of the tailgate and makes the truck have more of a smooth wing/airfoil shape, where as the open tailgate has a large flat surface much like a brick; the airfoil obviously having a lower drag coefficient than a brick.

Maybe one of these day’s I’ll empty out the bed, and drive around all week with the tailgate down to correlate some test data.