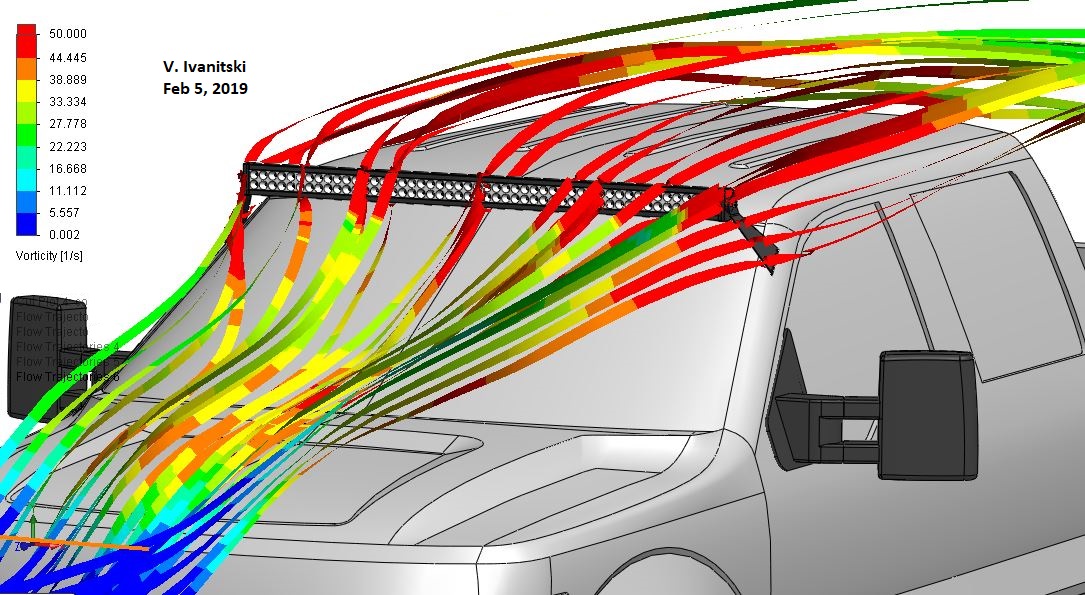 Lights and trucks seem to go together since the early 1970’s when KC HiLites started re-purposing aircraft landing lights for Baja 1000 race trucks. Lighting technology has advanced tremendously since the 55-watt halogen lamps, and can now be attained in the form of a high output LED bar for cheap. As a result, the fashion trend of installing the 50 inch LED lights above the windshield has skyrocketed. Some do it for style, some do it for the intended purpose off-road, in either case, it seems that since these are going mostly on big bulky trucks rather than streamlined race cars, there hasn’t been much work done on the aerodynamic effects of installing these lights.

To make things fun, I’ve modeled up our 2014 Ford F-150 crew cab with the 6.5ft long bed on 35in tires. Since most pickup trucks have similar characteristics, this analysis can be assumed to be pretty universal in the light truck arena. Getting a CFD (Computational Fluid Dynamics) model of our truck specifically was important not only in future applications, but most of all it gives us the ability to correlate analysis results with real world data (although, spoiler alert: we won’t be installing an LED bar above our windshield).

For the purpose of this assessment, we will be looking at the effects of the light bar on the vorticity of the airflow and the overall drag force. The drag force and real world data will then be used to calculate the estimated miles per gallon (mpg) fuel consumption effects of these light bar installations.

First, we need a baseline measurement of the truck, for this series, we’ll be setting things up for a speed of 65mph at 25°C. Running the analysis on the truck without the light bar gives us a drag force of 801N. Using the stored energy of gasoline of 125MJ/gallon, and solving a Work = Force x Distance equation, we’re able to derive a baseline fuel consumption of 18.5mpg (this took several iterations to hone in the internal combustion engine and drivetrain efficiency based on actual data from our truck). As a general rule of thumb, internal combustion engines have a thermal efficiency of roughly 20-25%; in this case I derived that the F150 has an efficiency of 19%, which is believable as a large truck with 35 inch tires will have more drivetrain loss than an average car.

Now that the 50 inch LED bar is mounted to the top of the windshield, I refined the mesh a little bit around the light bar so that we get more accurate results while working with the smaller details in that area.

The results of the aero analysis with the LED bar turned out to be more drastic that expected. Although it didn’t necessarily add any significant cross-sectional area, the light bar really messes up the smooth airflow over the roof of the truck, which increases the drag force to 853N. This is a 7% increase, and drops the fuel efficiency to 17.4mpg. I’m not saying that you shouldn’t do it, but if you are going to install a light bar on a truck, you will see a roughly 1mpg drop in gas mileage.

Now that you know a bit more, go out there and have some fun! I will be doing a series of these, so don’t hesitate to reach out with requests of what you would like to see.